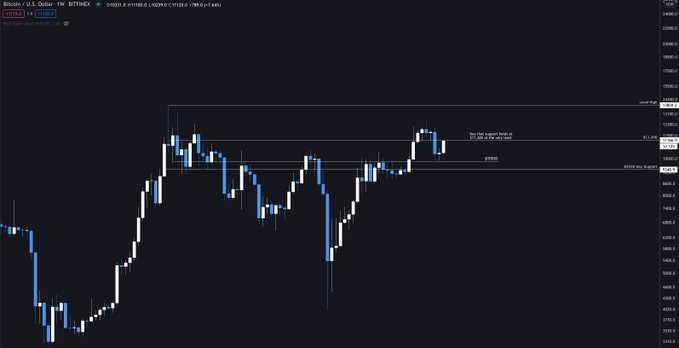 BTC Must Move Above $11,200 to Confirm More Upside

While many analysts have embraced Bitcoin’s rally from $9,800 to $11,000, the cryptocurrency is not yet in a bullish state.

One trader says that for BTC to truly convince market participants that it is in a bullish state, it will need to flip $11,200 into support on a weekly time frame. It attempted to do so in August but failed when the coin slipped in early September.

“Target / Major resistance finally hit, if you worried about price dropping from here and using leverage then close out your position and wait for this level to be flipped support… $11,200 is a key HTF level for flipping it will not be easy.”

Bitcoin will have trouble breaking past $11,200, though.

One cryptocurrency trader recently noted that there is a clear confluence of reasons why Bitcoin’s ongoing rally above $11,000 will soon reverse. A few of these reasons are as follows:

Analysts remain convinced that Bitcoin’s long-term trend remains bullish despite any mishaps that may transpire in the near term.

Dan Tapiero, the co-founder of DTAP Capital along with a number of other firms, recently commented that Bitcoin is likely to undergo exponential growth this cycle:

“Tremendous long term Log Chart of #Bitcoin projects up 5-10x on this run. Just breaking up NOW. Should last a few years as 2.5yr consolidation is fantastic base for catapult up. Break of old highs will have explosive follow through. Time to sit and be patient.”

Post source: This Level Holds the Key to Bitcoin Moving Higher in the Near Term

Bitcoin Price Analysis: BTC/USD Balancing At The Edge Of A Cliff, How Can $11,000 Hold?