With numerous projects flooding in Ethereum via DeFi, the utilization rate of the largest altcoin blockchain has been under avid discussion all year. With its own Ethereum 2.0 shift taking a back seat, the Ethereum blockchain was witnessed high levels of congestion which recently led to extremely high gas prices. 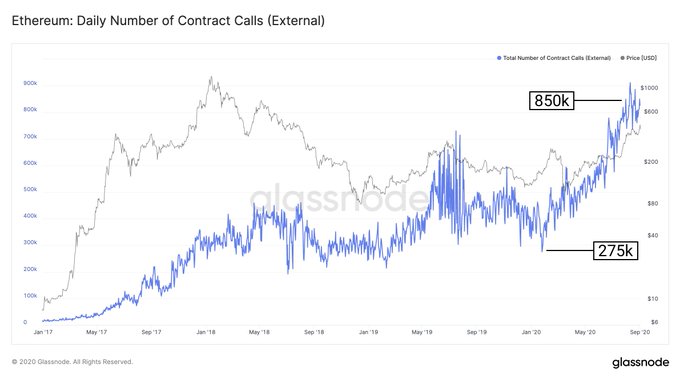 Now, according to Glassnode, the number of contract calls on Ethereum initiated by Externally Owned Accounts (EOAs) has almost tripled in 2020. The rate has gone from 300k to 850k per day at the time of writing.

Now, EOAs are defined as accounts that are controlled by private keys and do not have associated code with the blockchain. A higher percentage of users are usually EOA accounts.

Surprisingly recent data suggested that only 34.2% of the network transactions were used to transfer ETH between EOAs, while a mere 10.7% of the total fees were spent on transactions in 2020. These statistics are clearly an indication that ether transfers between users haven’t been the main use-case for Ethereum.

This is where DeFi’s involvement is seemingly getting out of hand.

Additionally, it was also suggested that the number of internal transactions in the network had grown over from 1 million in June to 3 million per day at the moment. Now, internal contract calls meant that the transactions were on-chain but it is possible that these transactions were only related to gas prices for DeFi and its latest yield farming practices.

Do such practices affect Ether’s value and functionality in the long-term?

Functionality-wise possibly not, because ETH is needed for all primary transactions. However, it is a whole different ball game when it comes to value. Given, Ethereum exploded in price over the month of August but at press time, ETH’s value had depleted $100 in a space of 72 hours.

Earlier in 2020, it was identified that around 52.4 percent of the fees are being used in “other contracts.” These “other contracts” do not utilize ERC20 or ERC721 standards, meaning that ether is barely used here for any use case, and this was before DeFi become a household name.

At this rate, the value proponent of Ether might continue to slide even though it will be met with a price pump now and then. Ethereum’s value and usage are not hurt overall, but the primary token ETH is currently facing a power struggle with all the other projects rising up the ranks within its parent Ethereum blockchain.

The post Is Ethereum giving up Ether for growth? appeared first on AMBCrypto.

Why This Billion Dollar Company Is Investing In Bitcoin